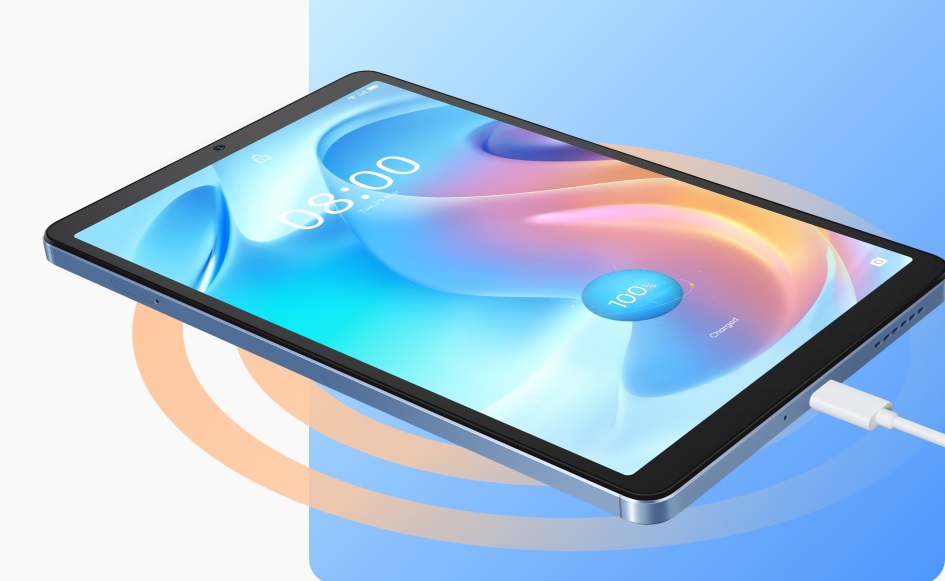 It has an 8.7′′ Large Display and a 7.6mm Ultra Slim Design, making it a device that is easy to carry and bring with you wherever you go. This screen size falls somewhere in the middle — it’s not too big, but it’s also not too small.

We discovered that the realme Pad Mini has stereo dual speakers, which are excellent for multimedia experiences; the sound quality is exceptionally loud and clear. The speaker is extremely loud and clear, but don’t expect much bass.

In terms of design, the realme Pad Mini has a slim form factor, measuring only 7.6mm thick, making it the thinnest tablet in its class, and weighing around 372 grams. The realme Pad Mini has an aluminum alloy body with metal frames on the sides for a premium look and feel, as well as a strong build quality. Depending on the model, there is an optional SIM tray on the left; the 4G LTE version includes a SIM tray on the left that allows you to use the SIM card on the tablet.

At the bottom of the device, you’ll find a USB Type-C port, as well as a loudspeaker and a microphone. The top side includes a second loudspeaker for stereo sound and a 3.5 mm jack for earphones and headphones. The right side has a power button and volume control, but no fingerprint scanner.

The realme Pad Mini is powered by an entry-level octa-core CPU, the Unisoc Tiger T616 SoC, which runs at 2.0 GHz. For gaming and GPU-intensive tasks, the SoC is paired with an ARM Mali-G57 clocked at 750 MHz. Because this is the same CPU as the realme C35, you can expect similar performance. The CPU outperforms the MediaTek Helio G70 slightly, and the overall performance appears to be adequate for daily use and fair for gaming.

The navigation is very fluid. The display is adequate; it can play 1080p content, which looks good in this setting. It’s very smooth and almost lag-free for gaming. With a 6400mAh mega capacity, the battery can also last a long time.

The realme Pad Mini has an 8MP rear camera shooter and a 5MP front camera. It’s good, but it’s not meant to compete with smartphones with high-end cameras. Still, you can take decent photos to post on social media. The 8-megapixel main camera has auto-focus, which aids in the capture of detailed images during the day but not at night.

The packing list included in the box was revealed during our unboxing. The realme Pad mini includes an 18W charger, an Important Info booklet, a Type-C cable, a SIM Card Tool, and a Quick Guide.

The realme Pad Mini is a good option if you’re on a tight budget and looking for an inexpensive Android tablet with an iPad Mini-like form factor. It is, in fact, a downgraded version of the realme Pad, which was released last year in India.

In terms of appearance, the Pad is made of both plastic and metal, giving it a nice overall appearance. The tablet also has a matte finish, which prevents smudging.

Should you buy it? realme has produced a decent tablet with a good screen and performance, but the price of the device must also be considered when evaluating it. The realme Pad Mini is the way to go if you want a device that can handle day-to-day tasks, is reasonably priced, and has a good battery.