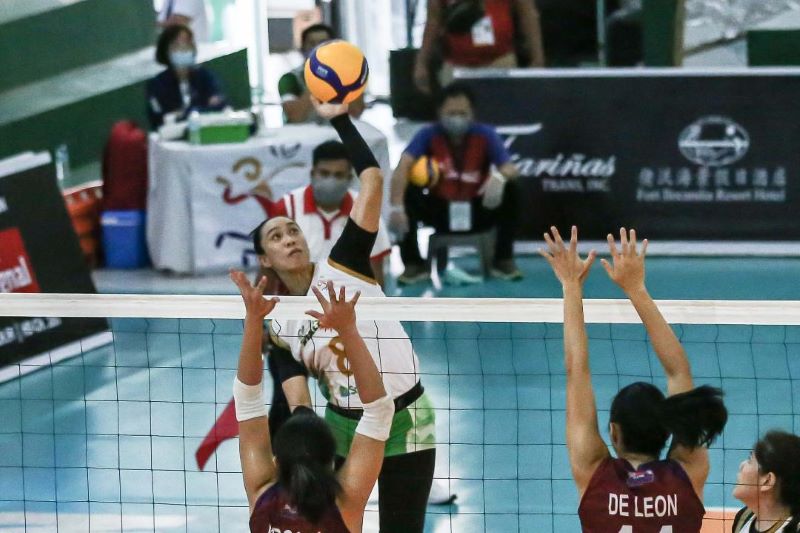 ILOCOS NORTE – Choco Mucho chalked up its second straight victory behind its vaunted blocking and an offense that went into full throttle from the onset, sputtered in the next before cranking up again in the third, dispatching a struggling Sta. Lucia side, 25-17, 25-22, 25-20, Friday night and seizing solo second in the Premier Volleyball League Open Conference at the PCV Socio-Civic Cultural Center in Bacarra here.

With the towering troika of Bea de Leon, Kat Tolentino and Maddie Madayag on the firing and defensive ends and Ponggay Gaston stepping up her attack in the third, the Flying Ttians flourished all game while pouncing on the Lady Realtors’ mishits and miscues in the last two sets.

for the crown in the country’s first-ever pro volley league.

“Every game is a must-win. Every game we should be learning towards the next games,” said Choco Mucho coach Oliver Almadro. “And this win is big since it’s a single round (elims) and Sta. Lucia is one of the contenders.”

The Lady Realtors reeled to their third setback against a lone win as the team groped for form all game with top hitters MJ Philips and Jonah Sabete failing to convert on their attacks and ending up with seven and nine points, respectively.

The HD Spikers, who turned back the Lady Realtors, also in four, last Wednesday, after a straight-set setback to the Crossovers, dropped to joint sixth with the Black Mamba Lady Troopers at 1-2.

Sta. Lucia also struggled with its first pass and receives and failed to find other offensive options, resulting to 26 unforced errors against the Flying Titans’ seven. Sabete typified the Lady Realtors’ wobbly stint with a serve that sailed long after she saved a match point on a hit, allowing the Flying Titans to record the one-hour, 26-minute triumph.

Tolentino emerged as the lone player to score in twin figures in only the third straight-set win posted in 12 games, finishing with 18 points while Gaston turned in an eight-hit game, the bulk of which she scored in the third.

“We didn’t expect (to sweep them),” said Almadro. “Good thing, everybody stepped up, particularly in the second set where we started slow.”

Meanwhile, the PVL gears up for its first triple-bill in a compact five-week schedule tomorrow (Sunday), spiced up by the Perlas Spikers’ debut in the country’s first pro volley tournament and capped by the Creamline-Chery Tiggo faceoff.