Saruta vows to break Pacio in ONE: REVOLUTION

Secret’s out! Here are the top camera features your favorite celebrities use to show off their true selves in portrait online! 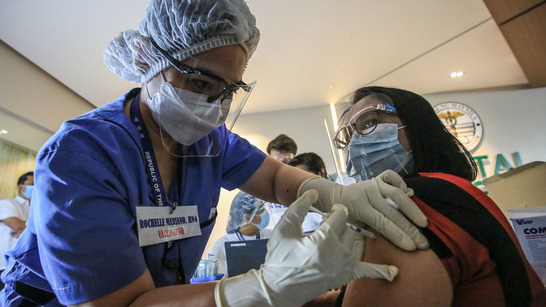 Metropolitan Manila Development Authority (MMDA) Chairman Benhur Abalos said that Metro Manila is aiming for 250,000 individuals to be vaccinated in a day during the two weeks of Enhance Community Quarantine (ECQ), starting August 6 to 20.

In an interview by DZBB yesterday, July 31, MMDA Chairman Abalos said that it was an agreement among mayors in Metro Manila.

“We met last night, so we could prepare for what might happen in the coming days. This is a heavy task, we would be inoculating 250,000 a day,” Abalos said.

He also added that Mayors in NCR appealed four million vaccines to be used during the ECQ.

Metro Manila mayors were asked the National Government to impose a hard lockdown to prevent the spread of Delta Variant.

Meanwhile, despite the lockdown, the Department of Health said up to 30,000 active cases might be recorded in Metro Manila by the end of September, as they projected.